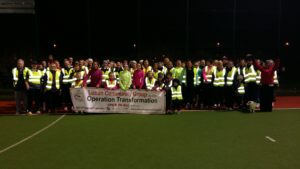 In 2013 prior to being elected, through my volunteering with my local schools Parents Associations, sports clubs and other community groups, I could see that there was a demand for a walking group in Lucan. As the TV program Operation Transformation was so popular around the New Year every year, I decided to setup Lucan’s Operation Transformation. The first set of walks in January 2014 following the TV program was a huge success with over 200 walkers taking part in the first year. We now run the walks on an annual basis starting in January of each year. The success of the walking group has led to some members now regularly walking throughout the year and others have taken up running through running clubs and Griffeen parkrun. A number have successfully completed races from 5k’s up to Marathons. Check out our Facebook Group here.