Liona originally from Ballyfermot, has now been living in Lucan for more than 20 years. 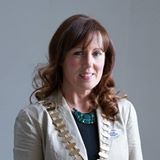 As a child growing up she spent many summers in Lucan with extended family living in Arthur Griffith and Hillcrest Estates. Liona and her husband Ciaran have three school going children. Prior to being elected Liona was very active within her community, successfully leading various campaigns and driving community initiatives.

Liona is an accounts technician and has used her experience over the years to support local companies starting up new business’s. She has worked in a number of business’s within Lucan and Palmerstown areas and currently works part time for a locally based company.

Liona has a keen interest in the promotion of Sport with herself and family being active members of Lucan Sarsfields GAA, Weston Hockey Club and Lucan Harriers.

Liona as a South Dublin County Councillor is a board/Committee member of the following:

Board member of Dublin and Dun Laoghaire Education Board (ETB)

Institue of Technology Tallaght Board (ITT)